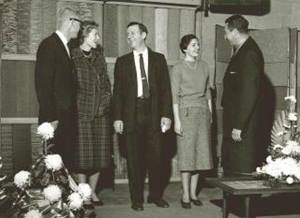 The late Kurt Weisbacher always listened to his customers. He started a commercial floor-cleaning business to earn a living in 1946, after returning from service in World War II. Beyond clean floors, customers wanted new floors, and they wanted Kurt to supply them.

So, carpet sales and installation were added to the business. And by the time of Carpetland’s 1959 Grand Opening in Woodlawn, Carpetland was becoming Cincinnati’s go-to place for expert service, competitive prices and dedication to customers – demonstrated by everything from superior installation warranties, to toys for children to play with while their parents shopped, and free gold fish from the store’s fish pond.

[Pictured on right: Kurt Weisbacher (center) and his wife Inge at Carpetland's Grand Opening in 1959.]

At the time, Kurt did not know that his company would grow to be the 16th largest full-service flooring group in the country. But he did know what he had to do to keep his business growing: Listen to the customers’ needs. Be someone the customer can trust. Offer expertise, service and products that are second to none. And watch for unmet needs, then meet them.

Sixty-eight years later, these traits live on and define today’s Carpetland Carpet One Floor & Home. Carpetland offers Greater Cincinnati’s widest selection in all categories of hard and soft surface flooring, including people- and planet-friendly flooring products. The company is overseen by Kurt’s son, Ken Weisbacher, and is part of the locally owned KW Flooring group.

The Weisbachers’ business growth and success are not a typical hard work equals success and achievement of the American Dream story. It is rather a story of hard work, perseverance and having the ability overcome extreme obstacles, including economic downturns—and even embezzlement, which once stood to destroy Kurt’s business. 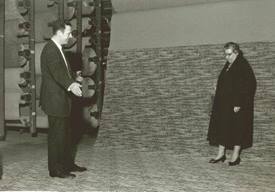 No one was surprised by Kurt’s ability to work hard, persevere and be successful. During the 1960s and 1970s the company grew rapidly, expanding to six branch locations. Kurt, fortunately, also had the ability to adapt to drastic changes, no doubt something he learned early when at the age of 13, his family fled Nazi Germany, relocating to Cincinnati. After high school, he earned a degree in Civil Engineering from the University of Cincinnati, and then was off to serve in the U.S. Army.

By 1978, Kurt had hired Steve Contois, now vice president of KW Flooring, as company sales manager to help with the growing needs of Carpetland’s local chain of stores. Kurt’s son, Ken Weisbacher, was in school at Northwestern University. He asked his father to send him some of Carpetland’s financial statements so he could practice analyzing them for one of his college accounting courses.

[Pictured above: Kurt demos carpet off the Track Rack which allowed customers to walk on the actual carpet they would buy and was a great selling tool.]

His analysis revealed inconsistencies and brought devastating news. The company’s rapid growth and opening branch stores had led to a loss of control. The company’s accountant was embezzling funds. The company had been stripped of all of its cash and had a negative net worth. 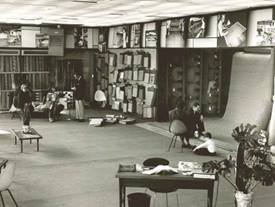 Kurt had to start over. He summoned every asset he could to stay in business. The company survived because it owned the property, which could not be stolen, and by the grace of Kurt’s strong relationships with his suppliers.

[Pictured on right: Ken Weisbacher (age 3) plays on the floor of the Carpetland showroom in 1960.]

While Kurt had wanted his son to pursue other dreams and opportunities, Ken, who had earned a degree in Economics and a Master’s in Management and Finance, decided he wanted to join and help his father. Controls were put in place. The company would no longer expand unless it could do so profitably. Operations were consolidated, into five, then three Carpetland branch stores. Accounting staff were given specific duties, including matching receipts with every company payment.

Space for hard and soft surface flooring displays within the showrooms was allotted based on sales, and monitored carefully. Ken and Kurt continued to focus on diversification – finding unmet needs and meeting them with programs such as shop at home vans and adding duct cleaning in addition to floor cleaning. They also began opening and acquiring other flooring stores to reach other segments of the consumer market.

In 1989, Carpetland joined Carpet One – part of CCA Global, a national buying group. While being a locally owned company, this gave Carpetland more buying power, enabling it to get products at lower prices and offer customers the best value. By the time Kurt passed away in 2009, the KW Flooring group had grown to include five companies.

Carpetland Carpet One remains as the place where salespeople, like their founder, pride themselves on understanding the specific flooring needs of their customers and supplying the most suitable products that meet their budgets. Operating in three Greater Cincinnati locations – Woodlawn, Milford and Erlanger, KY – they also offer heightened expertise in hardwood flooring, made possible by the addition, in 2007, of sister company, Schumacher & Co. Custom Hardwood Flooring, and company-wide training from the National Wood Flooring Association.

To meet the previously unmet needs of “green” consumers, Carpetland Carpet One also has become the region’s leader in low- and zero-VOC flooring products and hardwood finishes.

All the customer has to do is ask. Carpetland Carpet One salespeople will listen.